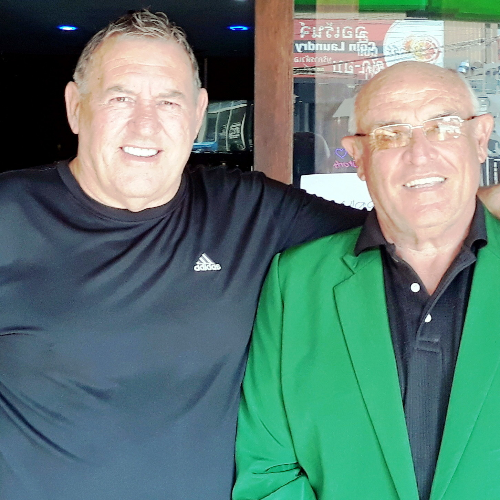 The rainy season is still with us, so it came as a surprise to be teeing off at Pattana under almost clear skies where we could actually see the sun.

Some high clouds did gradually move in but the temperature stayed very warm and, not being used to the heat, many tended to wilt a little. Only an intermittent breeze gave some relief.
The fairways were damp, a little fluffy and soft underfoot, so there were plenty of plugged balls. However, there were areas to take relief from casual water.

It is difficult to get the mowers onto the course and even more so for the rough, which is high and thick.
As carts were restricted to the path, it was very squelchy moving through the rough to get from cart to fairway.

The good news is that the greens, which had some problems not long ago, are in wonderful condition and a credit to the greenkeeper and/or management.

𝗡𝗶𝗴𝗲𝗹 𝗛𝗲𝗻𝘀𝗼𝗻 can hit a long drive and some good fairway shots, but his form is a bit up and down. His putting was good today, but there were some near misses that could have been a couple of extra points. On a good day he can be a winner, as he was just about two weeks ago.

Nigel was certainly a winner again today. Where others struggled, he made it look easy by putting together a very good 37 points, which is a handy score on this wet track.

With only seven starters, it was two places only.

The golf courses are lush and green at the moment after some good periods of rain. Playing golf on them when wet is a challenge, but there are many golfers up to the challenge.

𝗟𝗶𝗻𝗸𝘀 𝗚𝗼𝗹𝗳 𝗦𝗼𝗰𝗶𝗲𝘁𝘆 is a PSC affiliated, friendly group and welcomes golfers of all levels.
We play 𝗠𝗼𝗻𝗱𝗮𝘆 ,𝗪𝗲𝗱𝗻𝗲𝘀𝗱𝗮𝘆 𝗮𝗻𝗱 𝗙𝗿𝗶𝗱𝗮𝘆
Links Bar is towards the Southern end of Soi Buakhow.
Check the Big board out front for upcoming games schedule.
Sign up at Links Bar or online to join us for a day of golf.
www.thelinkshotelpattaya.com
Photo: Winner, 𝐍𝐈𝐆𝐄𝐋 𝐇𝐄𝐍𝐒𝐎𝐍 with Phil Davies presenting