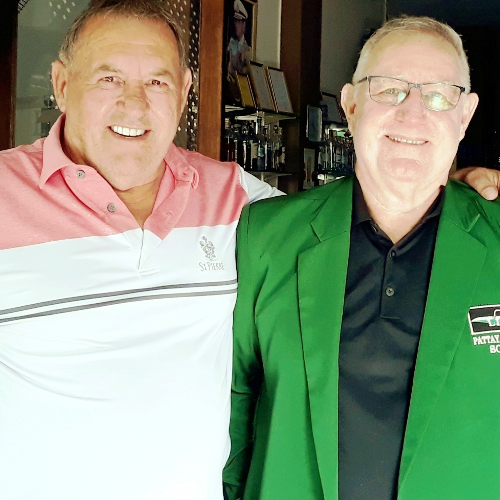 The big scores keep coming. Ten days ago, Petur Petursson amazed with 40 points from his #5 handicap then, two days ago, Bob Paine went better than that with 42 points.

This day saw another 42 points, this time from a very steady round of golf by 𝗗𝗮𝘃𝗲 𝗠𝗰𝗞𝗲𝘆. Dave has a solid and consistent pre shot routine, and it works well.

22 points on the front nine, followed by 20 points on the home run put him clear of the pack, and gave him his second win for this month.

Neil Smith has had some good scores since he joined us at Links, and some not so good, but his 38 points today was his second time with that score and now, as then, took second place.

Petur Petursson has been on the podium for each game since his return to Pattaya and filled third spot with a solid round of 35 points, showing just what a good golfer he is.

Len Jones had ‘best front nine with 21 points and Bob Paine had ‘best back nine’ with 20 points.

After a week of watching the weather forecasts, it was nice to have no such worry this time.
There was plenty of cloud about and some a very grey colour, but never a hint of rain.
However, it had rained the previous night, so carts were restricted to the path.

As it was a government holiday, the course was very busy and, at one point in the afternoon, my caddie was told that they didn’t have enough available caddies. Two rounds were on the cards for some.

The course was in very good condition and, even though they didn’t look pretty, with brown blotches and some sand, the greens played truly and with good pace.

The fairways are nicely cut and, on the B course, had some run. The rough, even though cut down, is still difficult.

We will return here to have another shot in about two weeks.


𝗟𝗶𝗻𝗸𝘀 𝗚𝗼𝗹𝗳 𝗦𝗼𝗰𝗶𝗲𝘁𝘆 is a PSC affiliated, friendly group and welcomes golfers of all levels. We play 𝗠𝗼𝗻𝗱𝗮𝘆 ,𝗪𝗲𝗱𝗻𝗲𝘀𝗱𝗮𝘆 𝗮𝗻𝗱 𝗙𝗿𝗶𝗱𝗮𝘆.
Links Bar is towards the Southern end of Soi Buakhow.
Check the Big board out front for upcoming games schedule.
Sign up at Links Bar or online to join us for a day of golf.