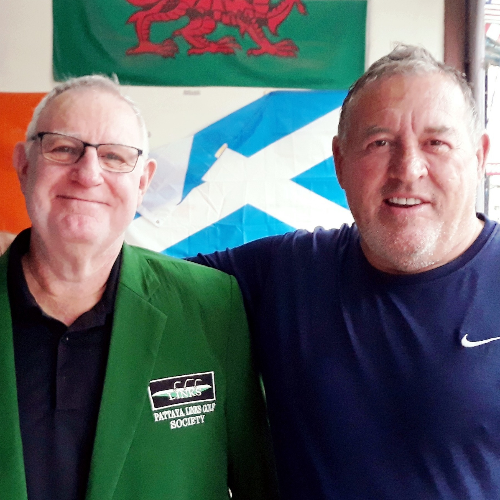 ❮ ❯
HIDE
𝐋𝐈𝐍𝐊𝐒 𝐆𝐎𝐋𝐅 𝐒𝐎𝐂𝐈𝐄𝐓𝐘....𝐊𝐡𝐚𝐨 𝐊𝐡𝐞𝐨𝐰…𝐀+𝐁…𝐅𝐫𝐢..𝐒𝐞𝐩𝐭.𝟏𝟎…𝐒/𝐟𝐨𝐫𝐝
Having already missed many games during the lockdown and then having the big flooding in Pattaya, causing a cancelled game midweek, it was a worry when, on this Friday morning, there was more overnight rain.
However, by the time players gathered at Links Hotel in the morning, that rain had come to a stop, leaving overcast skies and a slightly cooler temperature.

As we stood on the first tee of the A course at Khao Kheow there was some moisture, but only a drizzle, so the first group teed of pretty much at our booked time.

That drizzle persisted and by the fourth hole had become heavier so that some were scoping out a place to shelter. That was not needed as, when we stood on the tee of the par3 fifth, the rain stopped and didn’t return for the rest of the round.

The A nine was in very good condition although the fairways quite wet, hence carts on path only, so there were plenty of mud balls and casual water drops in addition to the lift, clean and place rule.

By contrast, the B nine fairways were much drier and firmer, even producing some run.

The rough is thick and deep, as per reports of most courses this past week, but the greens are in excellent condition with good pace, even after the rains.

Khao Kheow was quite busy again, but our three four balls had a clear run of the course.
Dave McKey plays sparingly but when he does line up he usually turns in a solid score and, if he doesn’t win, is somewhere in the mix.

This time Dave has had a steady, low key, first nine total of 16 points, but once hitting the firmer fairways of the second nine has roared home with 22 points for a grand 38 points to claim another Green Jacket. That now gives him one each in June, July and now September, good going.

There has to be winner and Dave had the most points, but Petur Petursson, playing off a handicap of six and, after scoring 21 points on the wet first nine, had a final score of 37 points to take second place.

Len Jones scored 34 points also, losing that countback but, recorded the ‘best front nine’ with 19 points.
Stan Stewart’s back nine of 20 points was much better than his first nine.

We know it is the rainy season, but this past week or so has seen some big heavy weather systems around our part of Asia causing plenty of rain and flood damage, and the forecast of more to come. Hopefully the system blows away before it comes to that.

We play 𝗠𝗼𝗻𝗱𝗮𝘆 ,𝗪𝗲𝗱𝗻𝗲𝘀𝗱𝗮𝘆 𝗮𝗻𝗱 𝗙𝗿𝗶𝗱𝗮𝘆
Links Bar is towards the Southern end of Soi Buakhow.
Check the Big board out front for upcoming games schedule.
Sign up at Links Bar or online to join us for a day of golf.