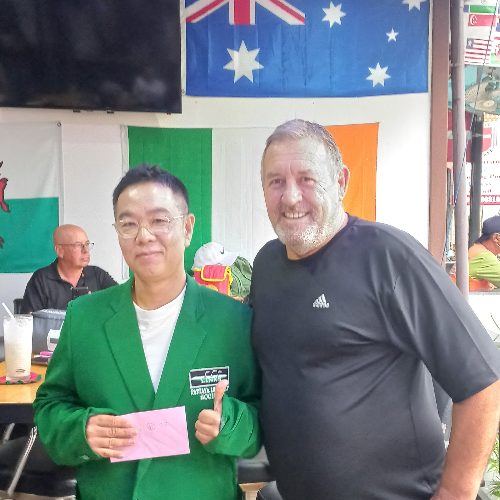 Yang and his mate, Lee, arrived in the morning, almost too late for the bus departure, and didn’t want to play in the competition.
Phil told them that we play 𝗰𝗼𝗺𝗽𝗲𝘁𝗶𝘁𝗶𝗼𝗻 𝗴𝗼𝗹𝗳 at Links and that they are in it. Then, they didn’t have handicaps, so Phil took a chance and gave them each a 28 handicap, then bundled them on to the waiting bus.

At the end of the round, Yang Toe Ho had played to that handicap with 37 points and take first place on countback.

George Mueller put together one of his very good games to score 37 points and be in second spot after losing that countback.

One of our regulars, Masao Ishikawa, was in the same group as Yang and Lee, although they don’t speak the same language.
Masa, who is Japanese, had one of his steady games to score 35 points to grab the third and final place on the podium.

We had twenty starters out today which was just enough to have ‘near pins’.

There was light rain during the trip to Pattavia and, as the players stood on the first tee, the light rain continued. However, by the time they had reached the first green, the rain had stopped and the remainder of the round was played under overcast skies, but no more rain.

The fairways were damp with the odd soggy spot, so we played lift, clean and place. The greens were in very good order, even considering the rain that had wet the fairways, and were as quick as you would think. They, too, had soggy areas around the fringes.

It was a nice day out and it was so nice to have a course not charging extra pricing for a public holiday.

The golfers stayed dry at Pattavia, but a wild, windy, wet storm was happening as the buses got back to Links, which lasted another 20 minutes.

𝐋𝐢𝐧𝐤𝐬 𝐆𝐨𝐥𝐟 𝐒𝐨𝐜𝐢𝐞𝐭𝐲 is a PSC affiliated, friendly group and welcomes golfers of all levels. We play 𝐌𝐨𝐧𝐝𝐚𝐲 ,𝐖𝐞𝐝𝐧𝐞𝐬𝐝𝐚𝐲 𝐚𝐧𝐝 𝐅𝐫𝐢𝐝𝐚𝐲.
Links Bar is towards the Southern end of Soi Buakhow.
Check the Big board out front for upcoming games schedule.
Sign up at Links Bar or online to join us for a day of golf.