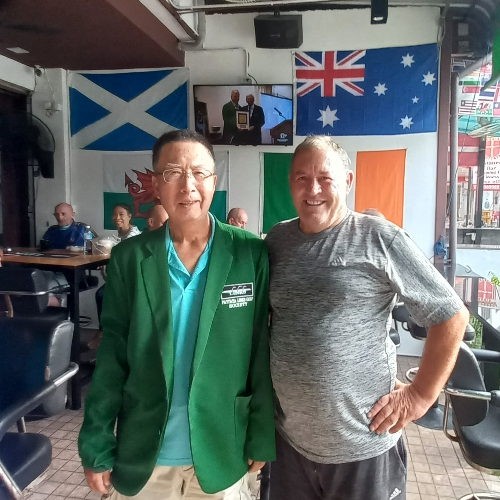 As a heavy and persistent rain storm caused flooding around Pattaya in the early morning, the question was how many players would cancel for today’s trip to Khao Kheow.
As it was, we had three cancels and one no show, which left us with twenty six players ready to take their chances on the weather.

Bad luck for those making the hasty decision to cancel, as the day at Khao Kheow turned out to be very pleasant and many golfers were rewarded with some good scores.

Takeshi Hakozaki, a long time popular player, gets around to different golf societies so that he can play his favourite courses.
He joined us today and had a wonderful time scoring 41 points. That good score gave him his first Green Jacket with us since 2019.
However, it wasn’t only Takeshi with that score.

Petur Petursson, playing from his handicap of #6, and still in form since his return from Iceland last week, also had 41 points, beaten into second spot on countback.

We haven’t seen Huw Phillips for a couple of weeks, but he was back today and in the same form as before. He has had an excellent score of 39 points to take third place.

Selwyn Yates has been very consistent during this holiday trip and was right there in the mix again and, as with all of the placegetters, came in under handicap with a solid 38 points for fourth place.

Kenny Jepson was a surprise but popular winner for the ‘best back nine’ consolation. He was as surprised at that as everyone else. He finished with 35 points total, well done Kenny.

The course has had some of rain, so carts were restricted to the paths. Some were surprised at the good condition of the ‘C’ nine but with both of the nines we played, there were plenty of mud balls and no run on the fairways.

It was decided that lift, clean and place through the green would be invoked.
This may have helped to produce the high scores on an otherwise tough course.

All who played came back happy as they were not only able to get in a whole round of golf, which looked a bit iffy in the morning, but also had nice weather to do it.
.
𝑳𝒊𝒏𝒌𝒔 𝑮𝒐𝒍𝒇 𝑺𝒐𝒄𝒊𝒆𝒕𝒚 is a PSC affiliated, friendly group and welcomes golfers of all levels. We play 𝑴𝒐𝒏𝒅𝒂𝒚 ,𝑾𝒆𝒅𝒏𝒆𝒔𝒅𝒂𝒚 𝒂𝒏𝒅 𝑭𝒓𝒊𝒅𝒂𝒚.
Links Bar is towards the Southern end of Soi Buakhow.
Check the Big board out front for upcoming games schedule.
Sign up at Links Bar or online to join us for a day of golf.