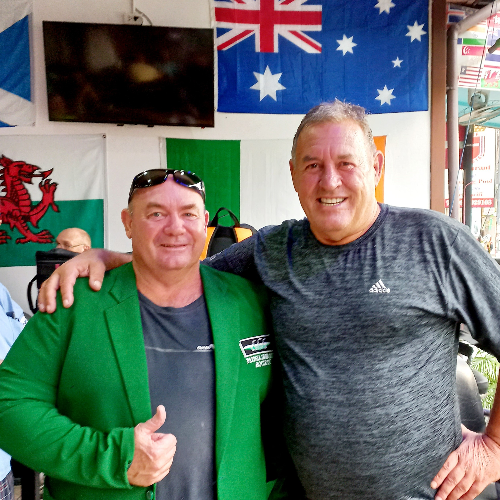 The morning was hot, with some dark cloud forming as our twenty two players made their way to the first tee on the ‘A’ course for an earlier than scheduled start.

This nine was in very good condition, as usual, but the greens were slower than we normally find here. It seems that this is the time of year for greenkeepers at many courses to leave the greens a little longer for maintenance.

Later in the round, just after our first three ball went through to start the ‘C’ nine, a huge bolt of lightning and loud thunder claps moved over the course, followed by heavy rain and a lot more lightning.

The club sounded the warning siren to clear the course as the storm continued to increase. After a wait of one hour, there was some uncertainty about returning, as radar showed another storm to follow.

Soon after, the siren sounded again for the all clear to play. During some confusion, three of our players thought the day was called off and packed away the clubs, only to find later that the rest had continued the competition.

Mike Firkin and the Green Jacket are no strangers, as Mike has won many times over the years. He doesn’t play with us quite as much these days, but certainly made the best of the opportunity, and the weather, to score 38 points, a good score under what were wet conditions for the second half.

Petur Petursson had a quick trip to his Iceland home and came back to jump straight into top form to score second place with a neat 37 points from his handicap of #6.

Mike Tottenham is also a rarity lately, although he is into the pool comps at Links. A solid 34 points took him to third place.

Steve Moxey was, once again, near the top of the leaderboard, winning a countback on 33 points to grab fourth spot ahead of his mate, Martin Crichton, who was playing with us for the first time.

Martin did go on to have the consolation ‘best front nine’, while Tony Browne had the ‘best back nine’

Having a delay of more than one hour, due to the storm and now, the Friday afternoon traffic, it was a little later back to Links for presentations, but it seemed no-one had anywhere else to go, as many stayed around chatting, with some trying out the new menu now available at the new look Links.

𝙇𝙞𝙣𝙠𝙨 𝙂𝙤𝙡𝙛 𝙎𝙤𝙘𝙞𝙚𝙩𝙮 is a PSC affiliated, friendly group and welcomes golfers of all levels.
We play 𝙈𝙤𝙣𝙙𝙖𝙮 ,𝙒𝙚𝙙𝙣𝙚𝙨𝙙𝙖𝙮 𝙖𝙣𝙙 𝙁𝙧𝙞𝙙𝙖𝙮.
Links Bar is towards the Southern end of Soi Buakhow.
Check the Big board out front for upcoming games schedule.