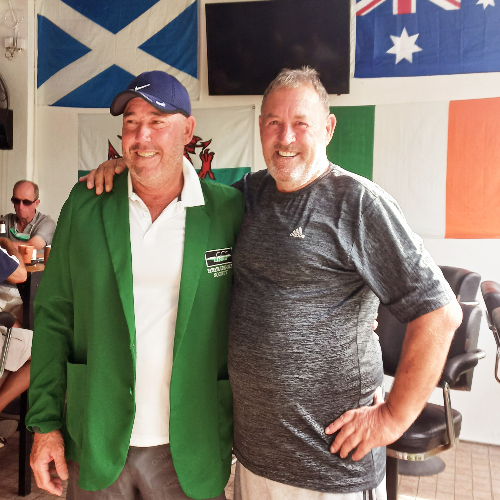 It seemed that it was ‘free dress Friday’ for the caddies at Parichat. But it looked more like a uniform, as all wore various combinations of red and white shirts and very short shorts/skirts.
It matters not what you call it, they were very pleasing on the eye for the golfers.

The golf course is in very good condition and for the average golfer, a pretty tricky and tough course. The trickiness is not made easier as some greens have so much undulation and pace, and today, some nasty pin placements.

Even when many have a hard time on a course, there is always at least one or even three shining lights who have been able to do well, as we had this time.

He’s about to head back to Aus. for a short while, but Darren See managed to beat the difficult Parichat course to score 36 points, and win his very first Green Jacket in his final round this trip. He will return soon to try for another win.

The next three placings were, what has become lately, the usual suspects.

Robert Cha really needs a handicap cut, but he is playing good, consistent golf and continues to be in the placings. On this course today, 35 points is a good score.

Billy Buchanan has also been very consistent and he is again in the mix with 34 points to take third spot on countback.

It was a three way countback on 34 points, but only the one slot left. Huw Phillips won the countback for fourth place to keep George Mueller out of a place.

However, George took the consolation ‘best front nine’ with 19 points, which would have been better on the back nine for him.

Another three way countback was needed to sort the winner of ‘best back nine’ and that was won by Grant Pride with 18 points.

Our day started out with a hot sun beating down on the first tee. However, not long after the start, the cloud cover drifted in to give some relief and the whole round was then played in very pleasant, comfortable conditions as the clouds darkened later on.

The dreaded six balls were out again and, as our first two groups were three balls, things did slow up for them. In the end though, all of our six groups finished in good time and the short trip home had us back to Links in the early afternoon once again.

We shied away from this course for a long time, but all players are happy to give it another try and to test themselves.

Check the Big board out front for upcoming games schedule.
Sign up at Links Bar or online to join us for a day of golf.
www.thelinkshotelpattaya.com