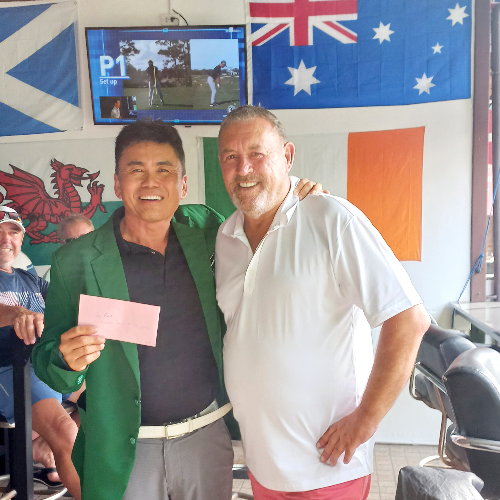 On the drive to Pattavia, the clouds were getting heavier and darker. Even as we gathered at the first tee, there seemed to be a threat of the rain returning from the previous evening.
However, as the day moved on, so did the heavy clouds, and it was a dry and quite comfortable round of golf.

The fairways here are almost always in very good condition and so they were today. The greens, normally pretty slick and tricky, were not cut right down, possibly, due to lack of rain, to prevent the possibility of them burning.
Never fear, missing a downhill putt resulted in the ball teetering off towards the edge of the green.
The tricky job today was to get it back uphill to the hole. With the slower pace, some found three putts happening unplanned.

The starter was anxious to get groups moving so, the four groups from the Society in front of us teed off about 30 minutes early, as did our five groups dropping in behind. Our booked time was 10.40 am, but all were away by 10.38.

The scores were, mostly, not all that impressive, however four players did have 35 points and all had 17 points on the back nine, so many countbacks ensued to sort the placings, and it was pretty tight, right to the last hole score.
In the eight games Robert Cha has played with us, most scores have been better than his handicap of #9. Very consistent, but he has not been able to win the Green Jacket.
Now, in his final week and with a score not quite to handicap, he has won all the countbacks to achieve his aim of a ‘Jacket’.

It was a close thing with Peter Kelly, who usually manages a good score when he plays with us, just missing the top spot.

George Mueller examined the cards when all the 35 points came in to make sure the countbacks were correct. They were, and George took the third, and final place on the podium.

Grant Pride was the fourth player with 35 points but settled for the consolation of ‘best front nine’ after winning a countback for that place.

With the early start, it was an early afternoon back at Links for the presentations. Now, with a cook and a whole new menu, some players decided to sample the wares for a late lunch. A thumbs up from all.

Two ice cream birthday cakes appeared, for Toby Glass and Michael Lohse, where everyone present shared the pleasure with the birthday boys.

𝗟𝗜𝗡𝗞𝗦 𝗚𝗢𝗟𝗙 𝗦𝗢𝗖𝗜𝗘𝗧𝗬.. is a PSC affiliated, friendly group and welcomes golfers of all levels.
We play 𝗠𝗼𝗻𝗱𝗮𝘆 ,𝗪𝗲𝗱𝗻𝗲𝘀𝗱𝗮𝘆 𝗮𝗻𝗱 𝗙𝗿𝗶𝗱𝗮𝘆.
Links Bar is towards the Southern end of Soi Buakhow.
Check the Big board out front for upcoming games schedule.