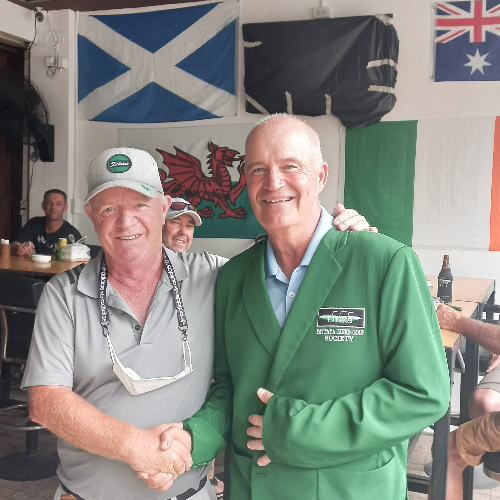 Even though we had only 21 players in 6 groups, the starter gave us a two tee start, which is something he always does when possible. So, as the three ball’s started from the ‘B’ course and the four ball’s on the ‘C’ course, all were away quickly.

As there were no hold ups during the round, all were finished and back to Links by 3.30 pm, that was even earlier than coming from Burapha on Wednesday. That leaves a lot of the afternoon.

Here is another course presented in very good condition and a feature is that the greens are almost always spot on. Even at times when they are sanded, they still play just right.
The weather was hot again, with lots of white cloud.

Eleven days ago, Mike Ehlert scored a lowly 34 points but, on that day, that was good enough for the win and the Green Jacket.
His score today of 39 points is much more the number we would expect and so Mike has won his second for the month of May.

Bob Rice has been back in town for a while but made his first appearance at Links this trip and was immediately into the action. His good score of 38 points won him second place on a countback.

Andrew Purdie is playing golf a lot more during an extended stay and has has had a couple of good scores recently. 38 points today is probably his best score this time around, although he has been close to that with 37 points at Phoenix.
He lost this countback to take the third spot.

After a warm but pleasant day at the course, it came as a surprise that, during presentations at Links, a sudden shower of rain hit quickly before easing to a drizzle for some time after. Better now than on the course.

The good price of 1250bht is still holding, so great value for us. Thanks Greenwood.

There is no ‘silly hat’ but George left his putter on a green, Again!

𝗟𝗶𝗻𝗸𝘀 𝗚𝗼𝗹𝗳 𝗦𝗼𝗰𝗶𝗲𝘁𝘆 is a PSC affiliated, friendly group and welcomes golfers of all levels. We play 𝗠𝗼𝗻𝗱𝗮𝘆 ,𝗪𝗲𝗱𝗻𝗲𝘀𝗱𝗮𝘆 𝗮𝗻𝗱 𝗙𝗿𝗶𝗱𝗮𝘆. Links Bar is towards the Southern end of Soi Buakhow.
Check the Big board out front for upcoming games schedule.