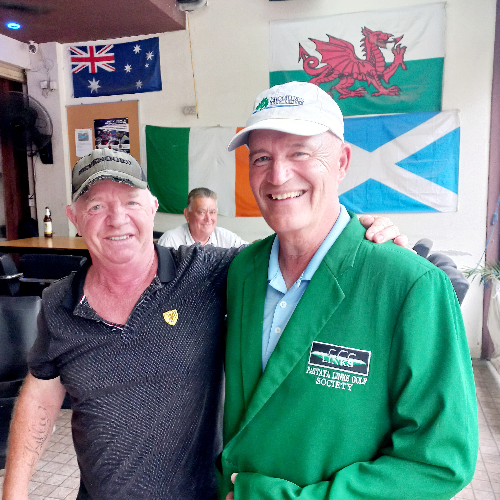 It turned out to be a hard day of golf for most of the seventeen starters, even though this tough golf course was presented in very good condition.
In the morning, someone reckoned that if there was to be rain in that area, it would most likely go to Pattana and not Treasure Hill.

How wrong was that? Indeed, heavy rain did come in, hard enough to hold up play for about 30 minutes. However, after the weather passed, all but one player continued to finish the round, even though it was a long day.

Interestingly, the first four placegetters had much higher scores on the second nine, even though they played that after the rain. Although, to be fair, the rain hardly affected the fairways or greens, so no excuses for the other twelve players.

Mike Ehlert continues to have lessons and, even though not a big total of points today, is doing well enough to pick up some wins.

Zong is still a twenty nine handicapper but can come up with a good score at times. His 33 points is a good score here so a deserved second place.

George Mueller is always around the leaders somewhere and his 32 points took third spot on a low scoring day.

Andrew Purdie, now that he has a manageable handicap, is finding enough points to get on the leaderboard. This score of 31 points was good for fourth place.

Even with everything upside down, due to all of the travel restrictions, it was hard to imagine the usual high and low seasons. But, it seems, that we really are having a low season as the number of golfers has dropped off in the past week or two.

The next couple of months will be interesting.

Check the Big board out front for upcoming games schedule.
Sign up at Links Bar or online to join us for a day of golf.