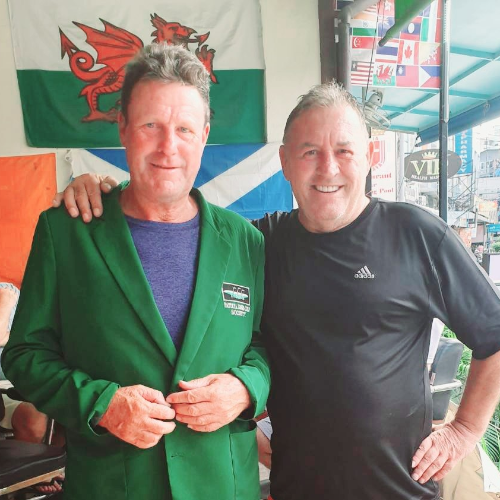 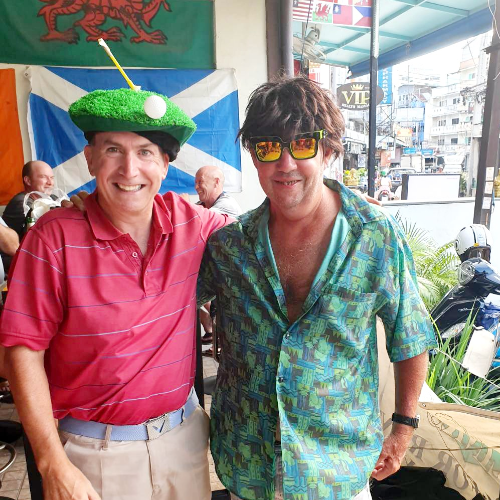 Twenty nine players went the distance to the beautiful Greenwood Golf Club on a warm to hot day with no indication of any rain about.
This course is almost always presented in top condition, with some of the most consistent greens in our area.
Which raises the question of why, it seems, the course is never very busy, certainly at the times that we visit.
The current pricing is more than favourable at 1250 bht all-In.
In fact, they allowed walkers for a charge of just 750 bht for green fee and caddie fee.

However, with no other groups present, that usually enables the starter to give us a two tee start, and that happened again today.

Two days ago, John Reps scored a very handy 37 points to finish second in his flight. We suggested that another Green Jacket was not far off.
John made that prediction look good by scoring 36 points here, making that the best score of the day and, yes, he gets to wear the Green Jacket.

Karl Flood had his best score for some time last week and has kept that good form going by recording 35 points to take second spot in a close countback.

We haven’t seen Huw Phillips for a couple of weeks. He was in very good form at the time. He has obviously played elsewhere and, still in that good form, his handicap has come down another shot.
Third place today after losing the countback to Karl on 35 points.

Tony Browne hasn’t been on top of the leaderboard recently, but has been scoring quite consistently, battling some recent bjg scores from others.
Another solid score of 34 points takes him to fourth place after winning a three way countback.

Brendan Kane joined us a just over a month ago sporting a #3 handicap. His game, so far, hasn’t allowed him to play to that, disappointingly for him.
However, he may have turned a corner. Now with a #5 handicap, has finished with 34 points, losing the countback to Tony and taking fifth spot.

Paul Hubbard, a newcomer to Links Golf also scored 34 points from his handicap of #8, to finish in sixth place after losing all the countbacks.

Brendan Kane was in the news for another reason as, being in charge of the ‘near pins’ for his group, forgot to put them out. That is a no-no. A phone call to Phil had Billy commandeer a cart to chase after the group. A ‘silly hat’ for Brendan.

Greg ‘Grog” Thomas had two honours. A near pin first, followed by wearing the ‘wig’ for having the lowest score of the day. Not many get two prizes.