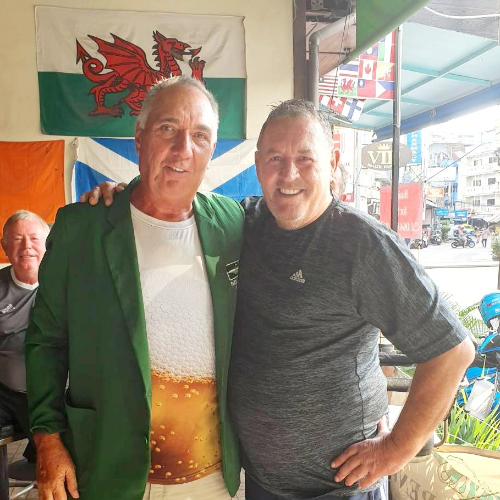 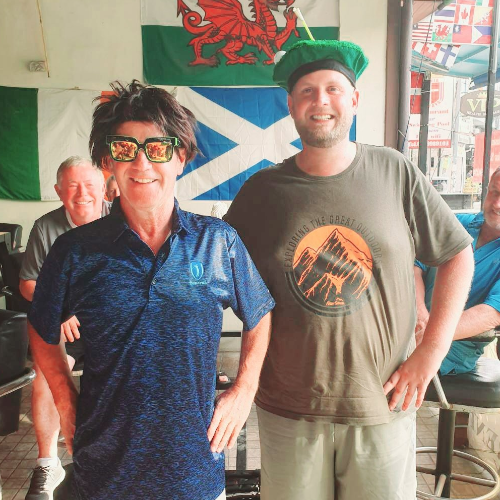 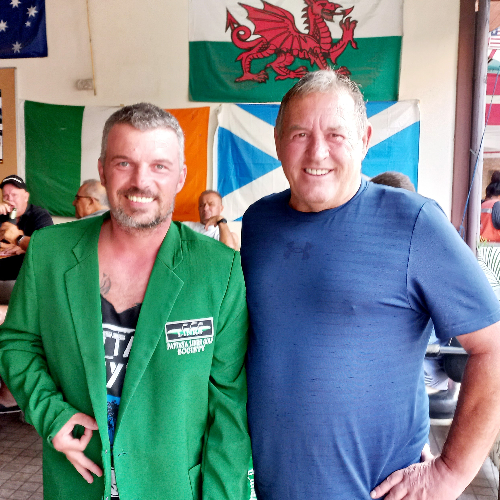 The ‘C’ course at Burapha has not been in good condition for quite some time, so it was with some trepidation. on the part of some players. when we were allocated the C and D combination.
Those fears were soon relieved when they found that the C course has improved greatly and is now right up to standard.

A big rain swept over the course, causing a 45 minute break in play. At one point, four of our groups were huddled in the shelter of one kiosk. Nice and cosy.

Wayne Peppernell probably still has some aches and pains from health issues, but they were all put aside as he concentrated on the golf game at hand.
Even with the rain interruption, followed by a wet course, Wayne has put together one of his good games to score an impressive 38 points. A second Green Jacket in three weeks.

When Ben Hebert started playing with Links Golf, he struggled a bit from his low handicap. However, more recently he has found the form that got him to that handicap and has had another podium finish.
Ben was one of three players to score 37 points and he won all the countbacks to take second place.

Colm Lawlor must have had a rare early night as he also scored 37 points, his best tally since returning to Pattaya. He won the next countback to grab the third spot.

Karl Flood, who also had one of his best scores for a while, was the third player on 37 points, so held fourth place.

Young Min Ko is getting a bit consistent with another very good round of 36 points to record another placing.

Billy Buchanan, after an impressive 41 points two days ago, carried on that form to slip into the final spot with 35 points.

Plenty of highlights today and one of them was 𝗝𝗮𝗺𝗶𝗲 𝗕𝗼𝗼𝘁𝗲𝗿𝗯𝗮𝘂𝗴𝗵 making a much sought after Hole-in-One.
Good one Jamie!

𝗡𝗲𝗮𝗿 𝗣𝗶𝗻𝘀: Jamie Booterbaugh scored a ‘Hole-in-One and was paid all of the near pins’ booty.

On the third tee of the day, big Michael Wright tripped and fell unceremoniously in front of the group. As he is a fairly big guy, getting back up was something to see. Arms and feet flailing somewhat was a sight. Of course, he was nominated for the ‘silly hat’.

Patrick Hardinge came to play at Links for the first time, as part of a group tour from Australia. It used to be that Phil was reluctant to put the ‘wig’ on a newbie, but that changed today. Welcome to the ‘wig’ club Patrick.

The ‘wig’ is presented to the golfer with the lowest score of the day.
.
It is always good to get to Burapha Golf, and now that everyone is happy with the ‘C’ course, we see many more trips here to come.

𝑳𝑰𝑵𝑲𝑺 𝑮𝑶𝑳𝑭 𝑺𝑶𝑪𝑰𝑬𝑻𝒀 is a PSC affiliated, friendly group and welcomes golfers of all levels. We play 𝑴𝒐𝒏𝒅𝒂𝒚 ,𝑾𝒆𝒅𝒏𝒆𝒔𝒅𝒂𝒚 𝒂𝒏𝒅 𝑭𝒓𝒊𝒅𝒂𝒚.
Links Bar is towards the Southern end of Soi Buakhow.
Check the Big board out front for upcoming games schedule.
Sign up at Links Bar or online to join us for a day of golf.