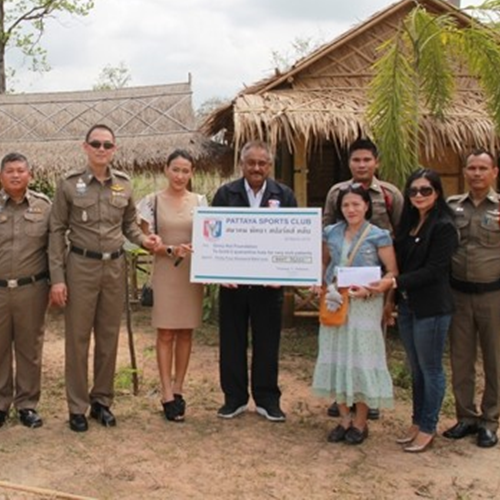 PSC President Pratheep S. Malhotra and Welfare Chairwoman Noi Emerson presented 34,000 baht to hospice Director Pornsawan Kitpirak March 28 for the purchase of 2 isolation huts where patients in the end stages of AIDS can reside individually, or those taken in can be treated before joining the general population.

Peter said, “The Pattaya Sports Club is privileged to be able to bring relief for some of the despairing patients afflicted with this dreadful disease. The HIV infected patients who are prevented from coming into contact with other patients are forced to live in isolation. We feel that they have the right to be treated with dignity and be given lots of love and care during this tragic period of their lives. This is the least we can do to help them.”

President Peter went on to say, “The Pattaya Sports Club whose objectives are not only to promote sports but also to support local charities, will monitor the needs of the Glory Hut Foundation and will further extend assistance to them when the need arises.”

Pol. Lt. Col. Atipong Wuthwattanakul, deputy chief of Huay Yai Police who was invited to witness the presentation said that he was proud to be a part of the effort to help the shelter. “I commend the members of the Pattaya Sports Club who are attentive to the needs of the underprivileged and are ever willing to extend a helping hand to those in need. I wish more people in our community would do the same.”

Pornsawan Kitpirak, Director of the Glory Hut Foundation said that 4 years ago Nongprue Sub-district launched its “Generosity for AIDS Patients” drive in response to a June 2014 vote by the Soi Chaiyapornvitee 29 community to force Glory Hut to leave the neighborhood, citing all manner of reasons, ranging from fear of children catching AIDS to sewage problems to claims of ghosts.

The sub-district suggested the hospice move to the Tungkomtan-Man area of Moo 7 village but up to 5 million baht would be needed to acquire land, construct facilities and relocate operations.

Famed AIDS activist and monk Luang Phu Alongkot Dikkapanyo, abbot of Phra Baht Nam Phu Temple in Lopburi, led alms-giving ceremonies to raise funds for the relocation of the AIDS hospice evicted from its Pattaya neighborhood by the intolerant neighbors.

In all, 2.52 million baht was raised for the embattled shelter, leaving the charity only 800,000 baht short of its 5-million-baht goal to purchase new 2.2 rai of land on Soi 16 in Tungkomtan-Man area of Moo 7 village near Horseshoe Point.

Eventually more funds were raised to buy land in Soi Huay Tanu-Tungkomtanman 18. A recuperation building was built for patients with AIDS called “Akan Ruam Nam Jai Ban Rak Puean”. Utilities and a waste treatment system were installed on the 2.5 rai land with an 11,500,000 baht budget.

The mission of the foundation is to be the caring centre for patients with serious diseases. They provide accommodation, meals and medicine.

Volunteers work closely with hospitals around the country in helping to cure patients suffering from body and spiritual illnesses.

Most of the funds are received from charitable organisations and from the generous public. Patients are taught skills in handicrafts and arts so that they will feel useful and build their self-esteem.